One of the flagships of the educational offer of the Politecnico di Milano is the flight test campaign of the Experimentation in Flight programme. It is a unique opportunity that combines passion, academic preparation and practical experience in a fascinating and highly specialized field, explains prof. Lorenzo Trainelli, programme head: the so-called airmanship, or the ability to interact safely with flying machines and the airport environment.

Each student (who wishes, it is not mandatory) plans and executes a flight test mission, acting as a Flight Test Engineer alongside the pilot. The goal is to expose students to the complete Flight Testing process: from planning, to practical execution, to data analysis and reporting, supporting them in developing a skill that cannot be studied from books.

ON BOARD THE FLYING CLASSROOM

We affectionately call it “P92DAER”: it is a Tecnam P92 Echo ultralight aircraft operated by the Department of Aerospace Science and Technology (DAER) for over ten years and then grounded following a breakdown.

To maximize the opportunities for students to access the experimental tests in flight, the P92 is essential: for this reason, the University has decided to recover it in flight conditions, an operation which involved some important interventions. Completely renovated, on Saturday 26 November 2022 the flying classroom of the Politecnico di Milano made the first flight of its new life over the Bresso airport ‘G. Clerici’.

The operation was sponsored by Longines, Tecnam and a large group of donors through the Alumni community, in collaboration with Aero Club Milano (ACM), the historic flight school operating from Bresso airport, with which a highly successful partnership is in place for several years and which, among other things, will allow the flying classroom to be operated from the Milan airport just a few minutes from the Bovisa campus of the Politecnico.

Donations, sponsorships and departmental funds have all contributed to a body of work that includes major items such as engine replacement, ballistic parachute installation, various structural and instrumentation modifications, painting and badge application, and registration as an ‘advanced ultralight’ with registration numbers I-5882 (instead of ‘basic ultralight’ as it was previously).

P92DAER is ready to become a real flying laboratory, permanently instrumented for the acquisition of flight data, and will allow a reduction in the cost of flight hours for educational activities. It will also have a strong impact in terms of research, in particular on the analysis of flight data for the development of predictive models, both in the context of European Commission projects and in collaboration with companies and institutions in the aeronautics sector: experimentation on aerodynamics, innovative materials, sensors, control and automation laws, measurement techniques and much more.

Support the projects of the Politecnico di Milano 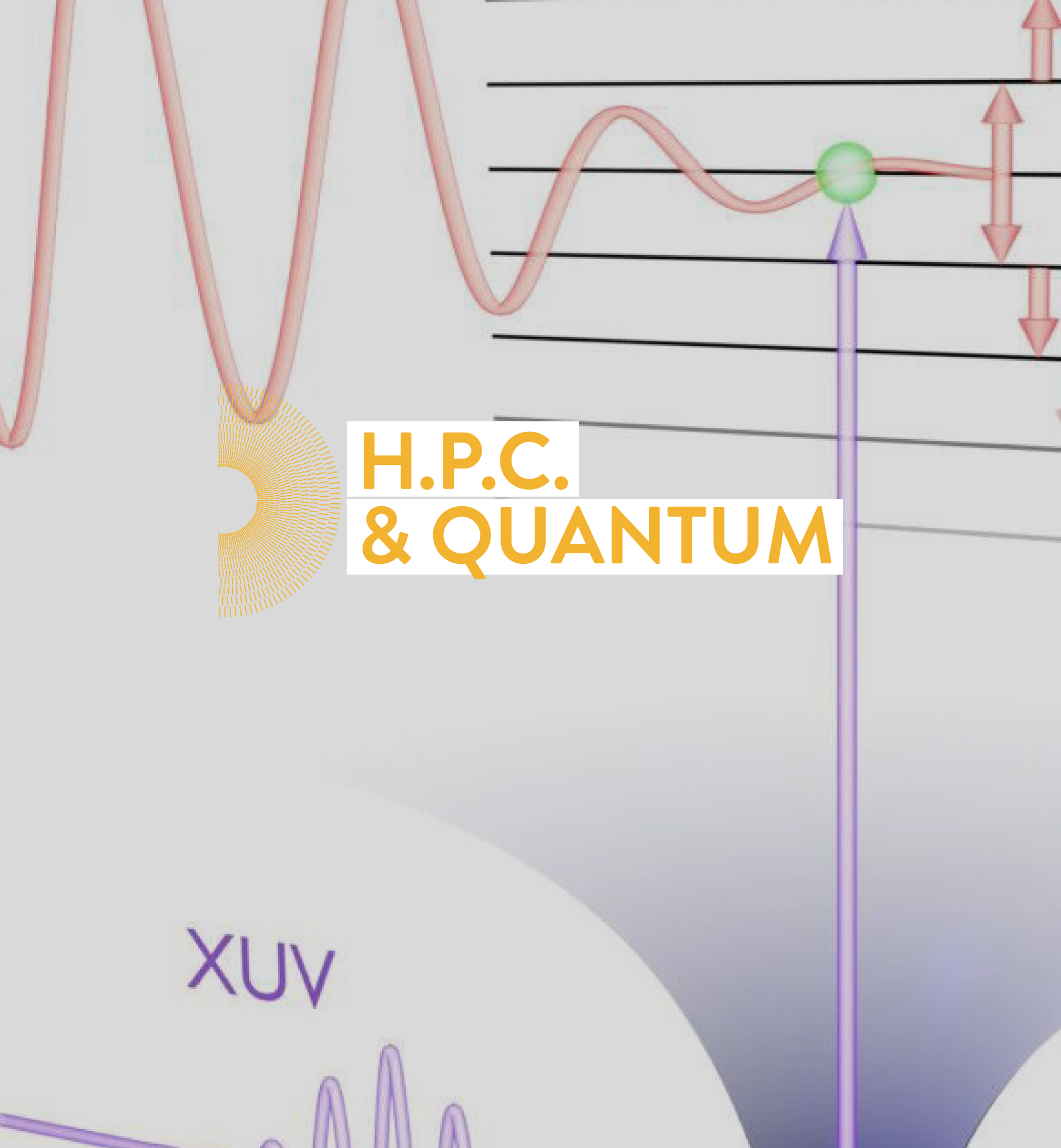 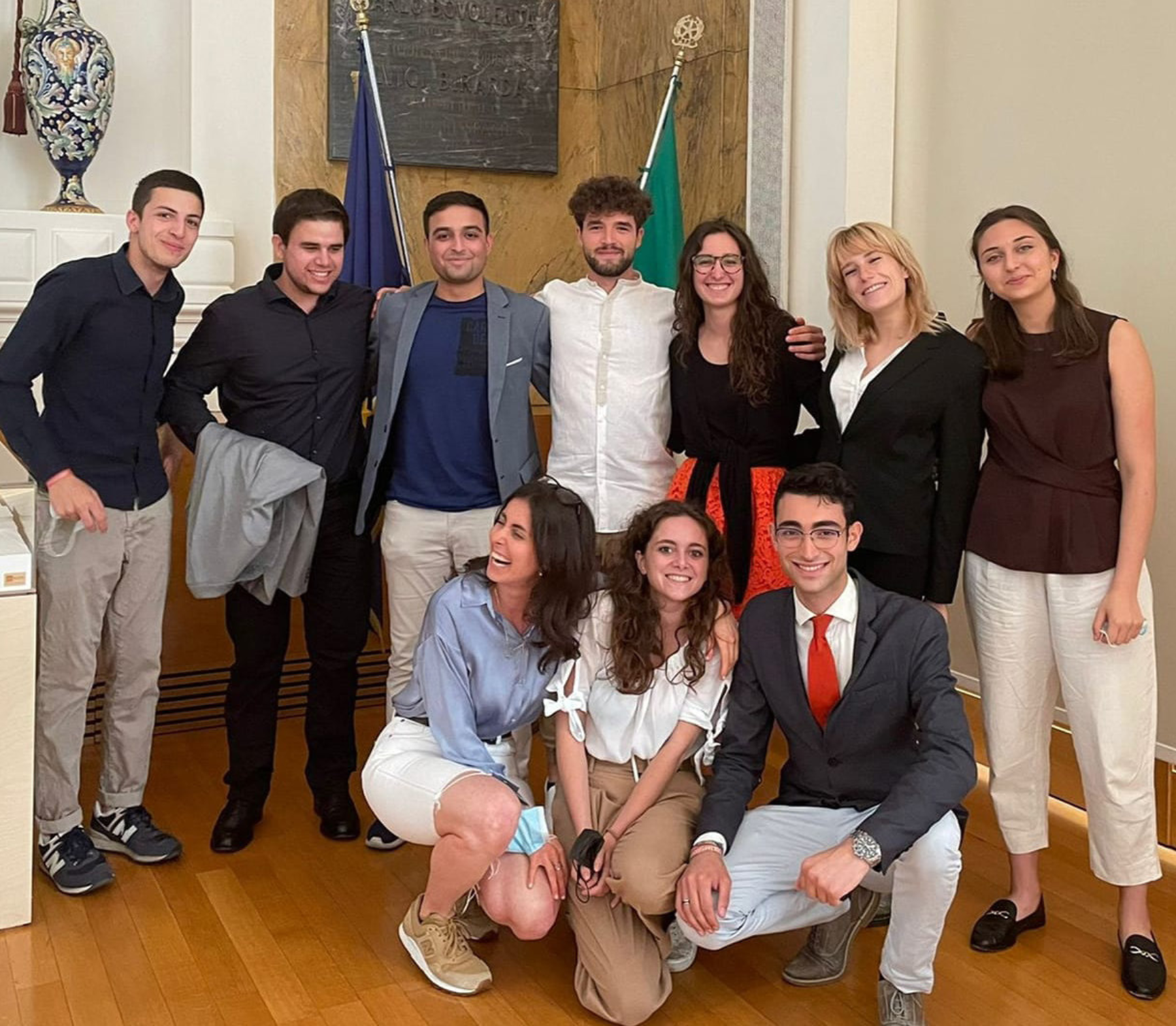 When and why did you choose to run as a student representative?

I chose to apply as Student Representative in February 2021. After a year of pandemic, a whole year locked up at home, I decided that as soon as I returned to the Polytechnic I would absolutely devote as much time as possible to giving everyone what I hadn't been able to have for a year and a half: a university life in attendance. As a representative you learn to work in a team, to manage crisis situations, to discuss continuously with your teammates to find the winning way. ‘Extra-study life is that extra piece that makes the student's puzzle complete, and makes them alert.

What does a typical day look like as a representative?

Wake up early in the morning and go to class, a few quick glances at the phone to reply to emails from some teacher or staff member or messages on Instagram, Telegram or Whatsapp from students. Then a break between one lesson and another and one chats with one's classmates, sometimes even about subjects experienced first-hand as a representative (news, meetings, opinions), one resumes the lesson and when it ends one takes out the lunch box and eats in company (in case of forgotten or unprepared lunch box: lunch in some eatery or street food shop). Then coffee, a game of scientific scopone or briscola a chiamata and back to lessons. Other breaks, other exchanges of emails and messages. At the end of the lessons there is always some representative activity: an institutional meeting, a student assembly or a discussion – followed or interspersed with an aperitif – with the list colleagues, finally one goes home for dinner and maybe one meets up with friends. At the end of the day an immense tiredness, but also a great satisfaction! Then there are occasions that take us away from the university, to talk about the university! We were recently in Berlin to participate in the Student Forum, the student representative body of ENHANCE, an alliance of seven leading European technology universities, and which includes two students from each of the member universities. We meet once a month, usually online, except twice a year when we get together in person to face meetings and workshops lasting one or two days in one of the locations. In Berlin we discussed our structure in view of the entry of three new universities into the alliance (Gdansk Polytechnic, ETH Zurich and TU Delft) and the progress of the project in general.

What are the institutional meetings as a representative?

In my case, there are many meetings: I simultaneously hold the position of Board Member and that of Vice President of the Student Council. Among the various meetings, about twice a year I attend the Permanent Student Commission, a body that mainly involves the six representatives of the central bodies, the Rector and the Director General. Here we evaluate and approve, for example, the cultural activities proposed by the student associations of the Politecnico, deciding where and how to invest the annual €500,000 that the Politecnico offers to students through the cultural activities call. But there's more: the Student Council, made up of twenty-six members, is the body where the central representatives meet together with all the faculty representatives. All this is added to the possibility of participating in countless specific commissions, such as the regulations or the building commissions. There is also the honourable possibility for me to request specific meetings with the Rector, Pro-Rector and with all the delegates and department heads who make up the University Governance. Ad hoc working groups are often created to talk about topics such as safety in the University or the problem of spaces.

"For contributions of particular scientific importance in the field of multiscale analysis of catalytic processes". With this justification Prof. Matteo Maestri – Department of Energy of the Politecnico di Milano - was awarded the 2022 Gian Paolo Chiusoli Gold Medal..

The prestigious award, established by the Italian Chemical Society on the initiative of the Industrial Chemical Division and the Interdivisional Catalysis Group, is awarded to Italian scientists no older than 45 years of age – working in university or industrial research centres – for contributions of particular scientific, innovative or applicative importance in the catalysis sector.

I am very honored and grateful to have been awarded the “Gian Paolo Chiusoli” Gold Medal in Catalysis by the Italian Chemical Society (Division of Industrial Chemistry and Interdivisional Group of Catalysis).
This medal is bestowed upon an Italian scientist, with a maximum age of 45 years, who has made contributions of particular scientific relevance in catalysis. This award is the result of the last ten years of work on multiscale analysis of catalytic reactions. I am very thankful and indebted to the colleagues and collaborators that I had interacted with during these research activities and, in particular, to the several brilliant, and motivated students that I had supervised on these topics at the Politecnico di Milano.

says the professor on Linkedin.

The award was presented on 7 November during the XXII National Congress of the Italian Chemical Society, Industrial Chemical Division held in Catania. 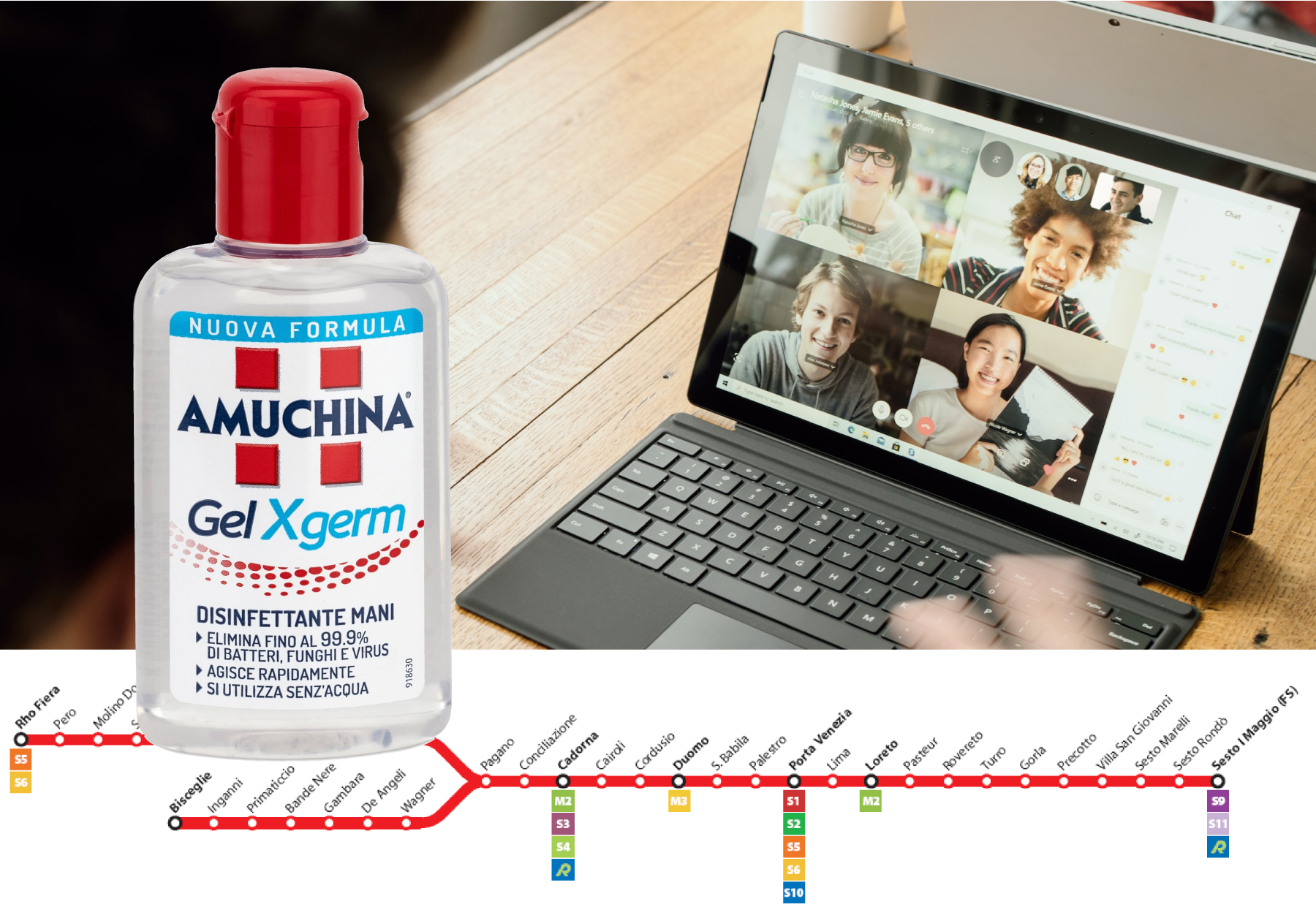 There are some celebrated polytechnic inventions and works – such as Natta’s discovery of isotactic polypropylene, which won him a Nobel Prize – and the others that are more unknown and date back many years, but are fundamental to everyday life, as we know it today. We have chosen three, but we await your comments so more can be added to the list. Let’s start!

To put it simply, it is thanks to the alumnus and engineer Giorgio Coraluppi that we can so smartworkingtoday. In fact, it was he who invented the algorithm for videoconferencing, which today allows us to speak to our colleagues on Teams and Zoom, and to communicate with friends on WhatsApp. Going back in time, in the 70s and 80s, Coraluppi’s algorithm also made it possible to connect thousands of technicians and engineers automatically, to plan the launch of the Apollo and NASA Space Shuttle missions..

It is not rhetorical to say that Coraluppi - adds Wired in an article following his recent death - was one of the key people in the development of digital innovation.

Over the last two years, disinfectant has become a permanent feature in our bags and pockets. What not everyone may know is that behind the famous sanitiser liquid lie the intuition and research of Oronzio De Nora, an Alumni of electrotechnical engineering, who filed the relative patent in the German archives under that very name in the early 1920s. He then sold it to focus on other things, and in 1923 he founded the Italian multinational company De Nora, which specialises in electrochemistry, and is today a leader in sustainable technologies for the green economy.

Due to a strange twist of fate, almost 100 years later, back at the Politecnico di Milano experiments were being carried out in the Chemistry Department laboratories, leading to the production of Polichina, a liquid sanitiser compliant with the WHO (World Health Organization) recipe that was donated to regional healthcare authorities, civil protection units in Lombardy and prisons in Milan, to reduce the spread of Coronavirus.

If you have travelled by public transport during your time at the Politecnico, then the subway signage will certainly be familiar to you: but did you know that there are two Alumni behind it?

The first train was lowered into the tunnels of the Milan underground on 10 December 1962. In the meantime, Franco Albini (1905-1977) and Franca Helg (1920-1989), with help with project management from the company Tekne, were entrusted with the task of designing the stations.

In contrast to many foreign underground systems, the architects’ design was characterised by uniformity and repetition. The vertical walls and ceilings of the stations were clad in a removable modular system that was easy and not too expensive to repeat.

As regards the rail signage, an innovative element was the repetition of the station name on red metal strips, easily visible through the carriage windows. The consistency between architecture and graphic communication is the result of close collaboration with the graphic designer Bob Noorda, who was involved in the project from the initial phases. The underground project won the designers the Compasso d’Oro award in 1964. 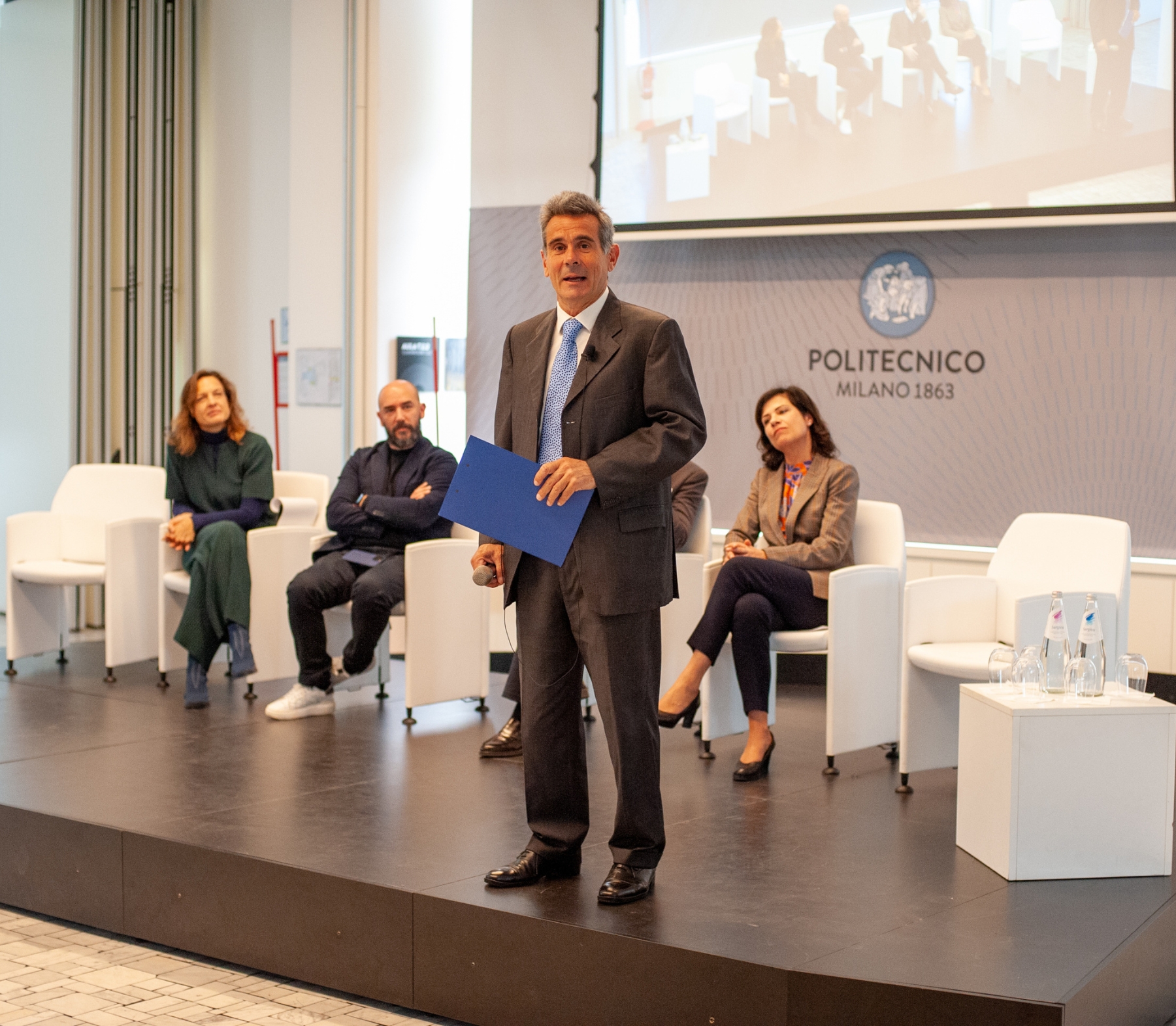 Let's review the best moments of the 11th Convention in our #Bestof2022: here is the video with highlights from the event that brings together, challenges and inspires the Alumni Community every year!

The Convention is one of the many initiatives created by Alumni Politecnico di Milano. If you like this initiative and the other ones dedicated to the Alumni community consider donating. 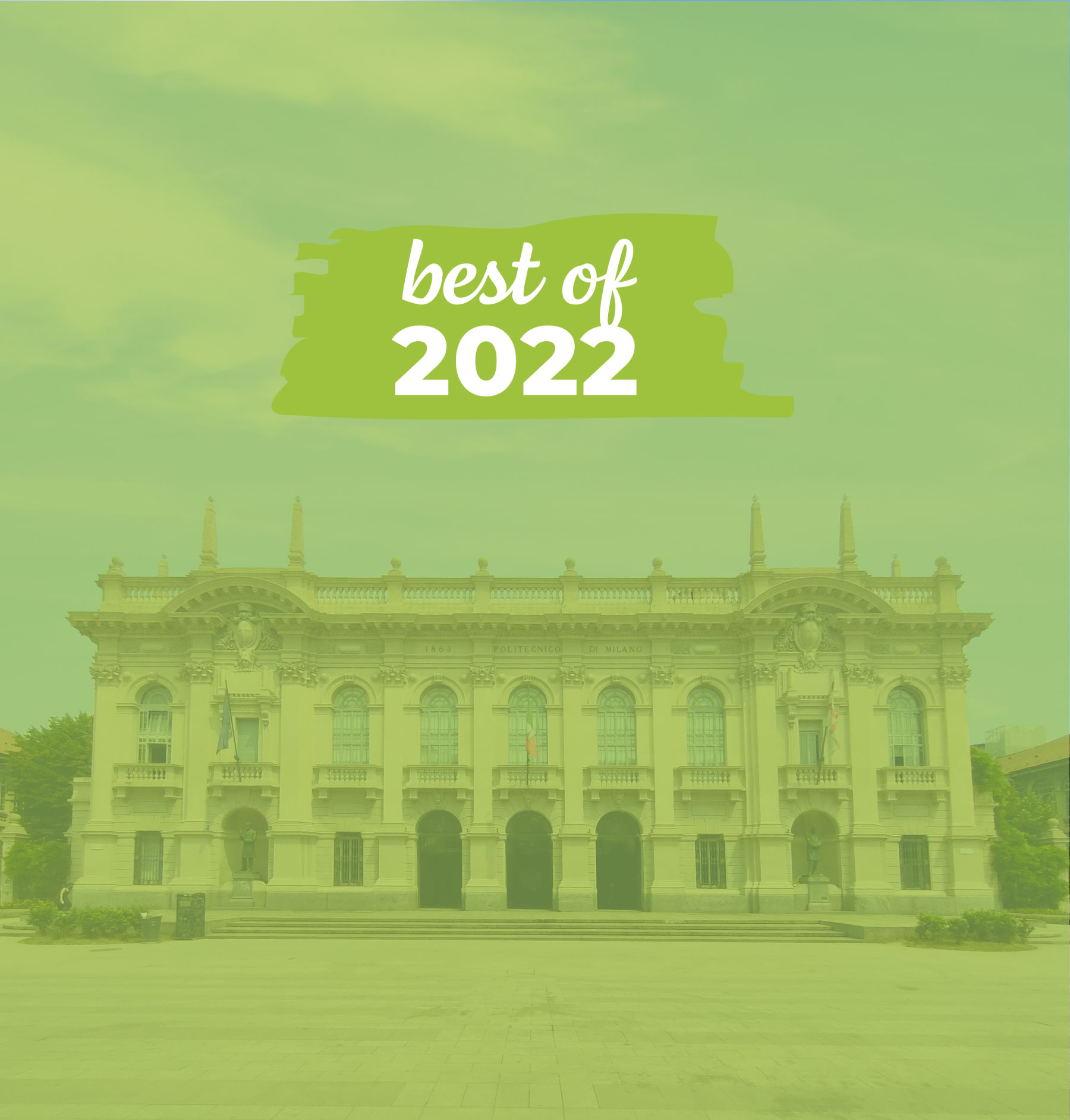 Telling you about all of our researchers’ achievements would clog up the internet, so here is a brief overview of the projects that made the headlines (or almost did).

Read the full story in MAP issue 11 starting from December 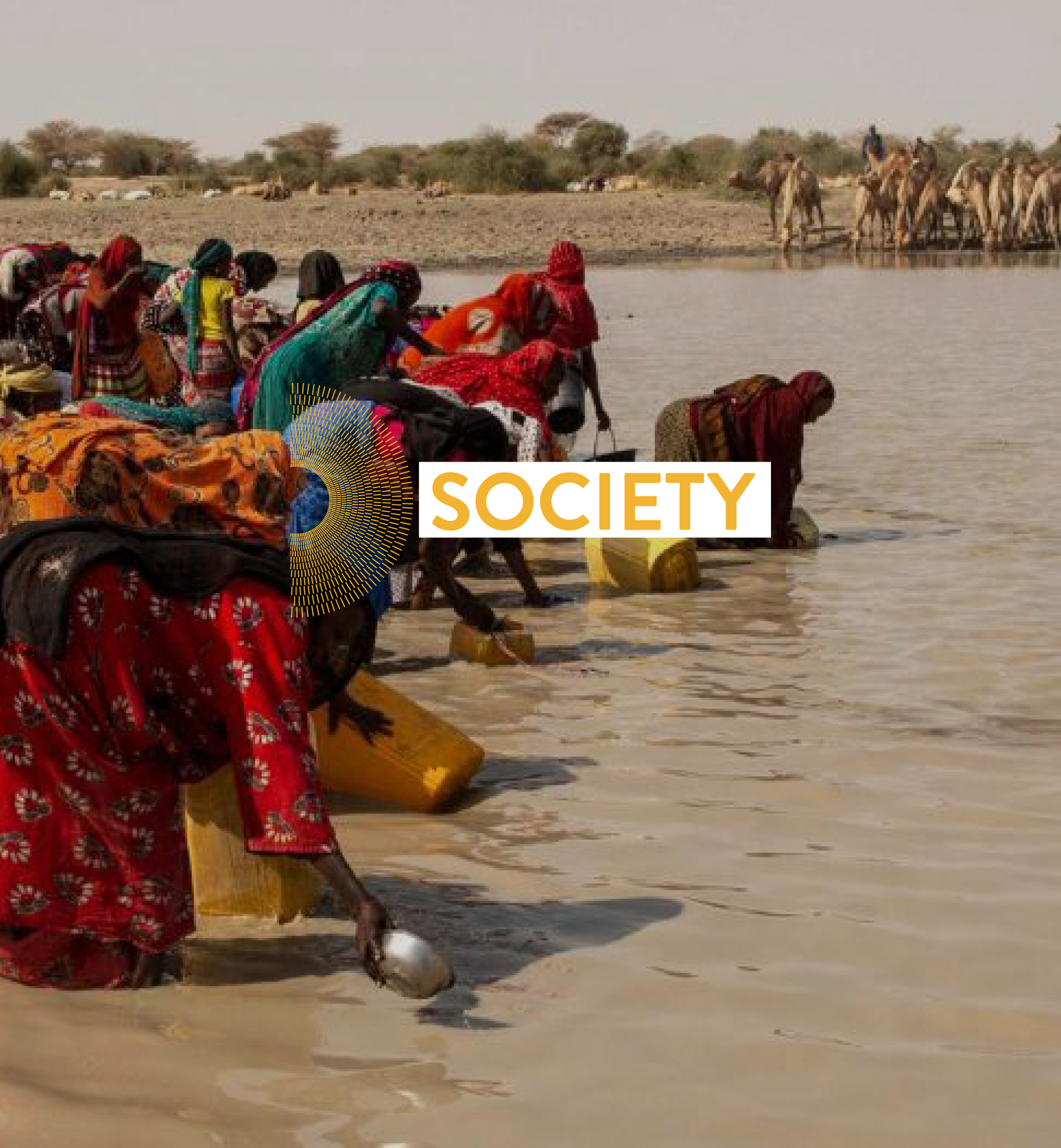 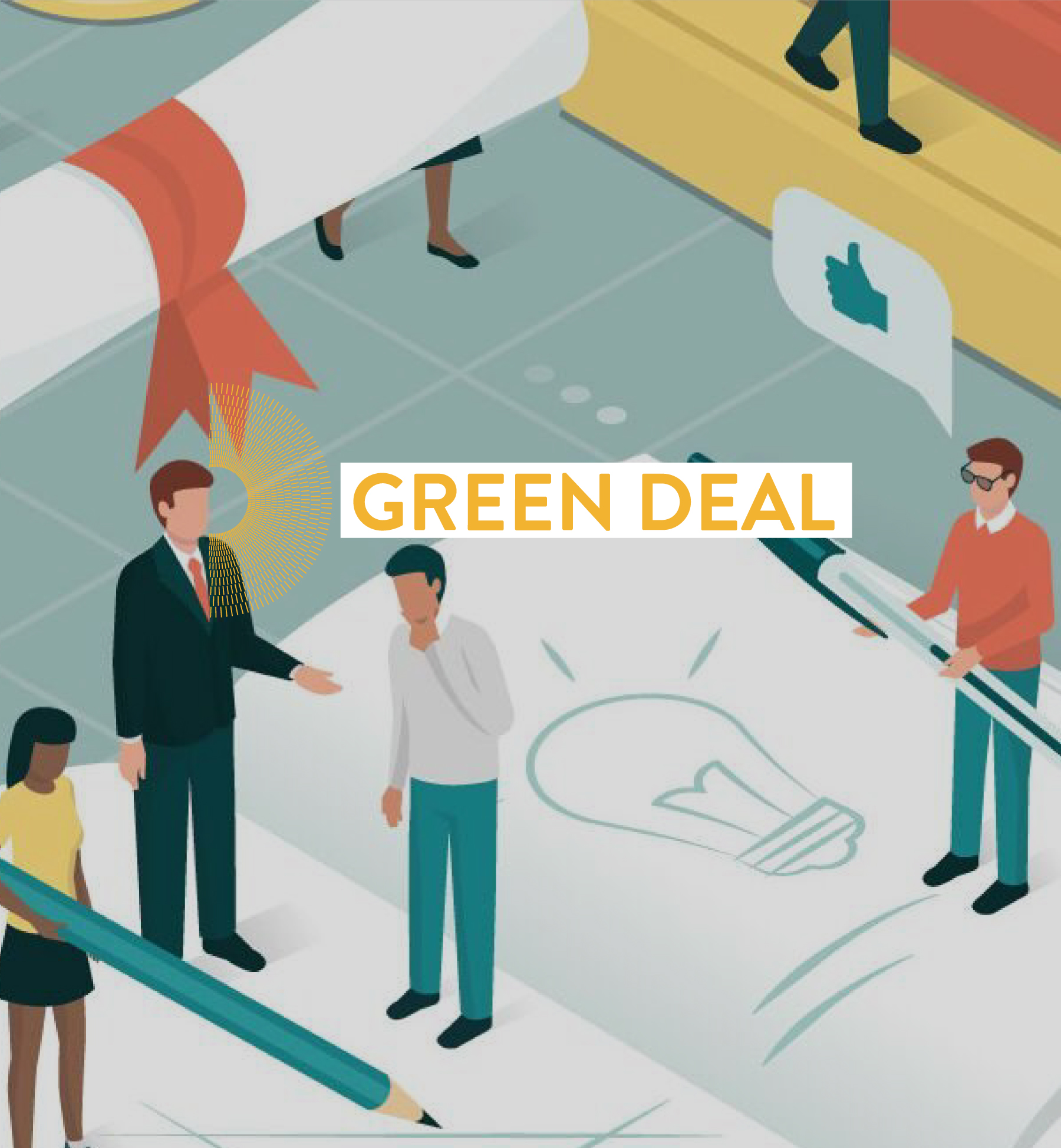 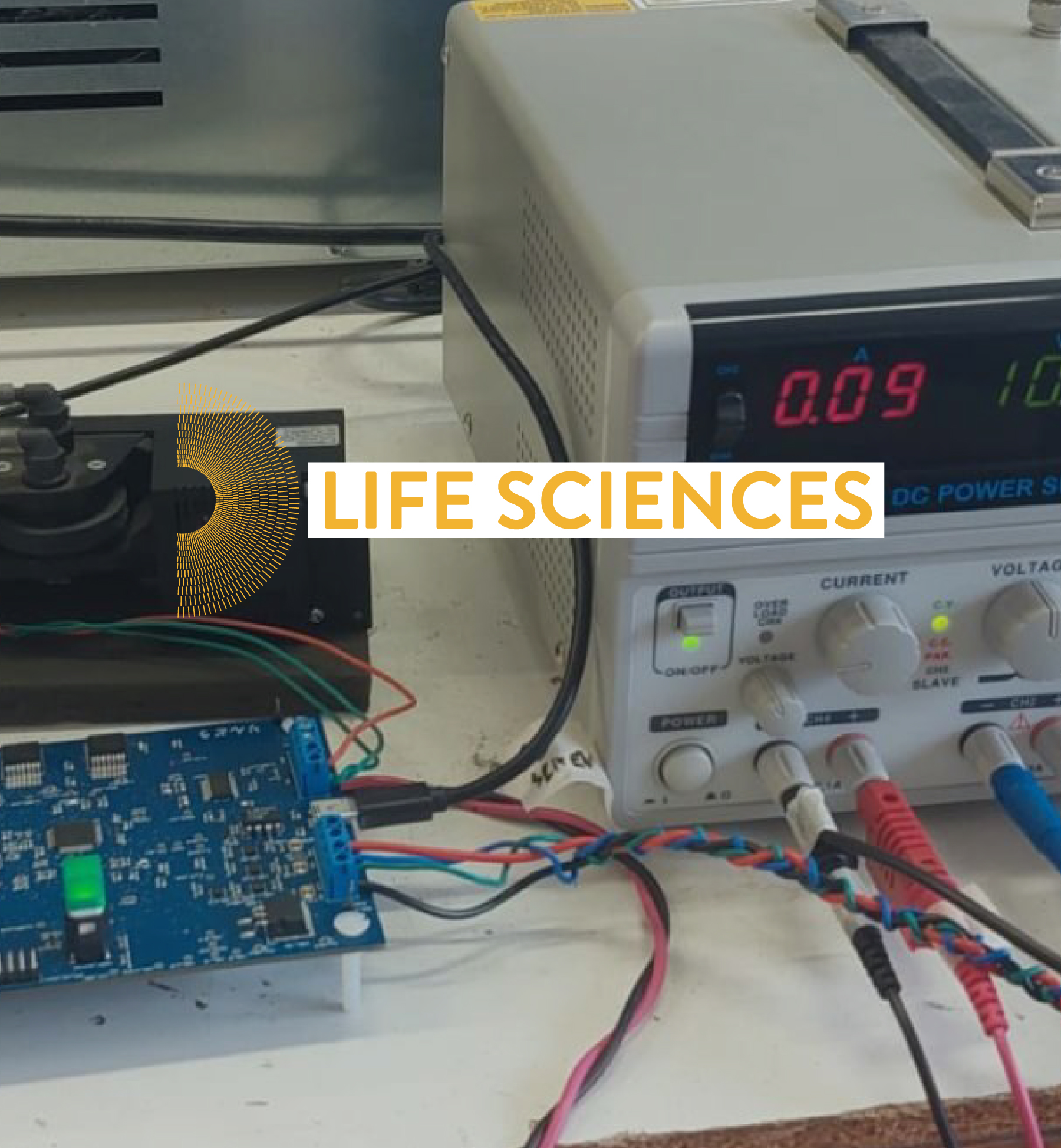 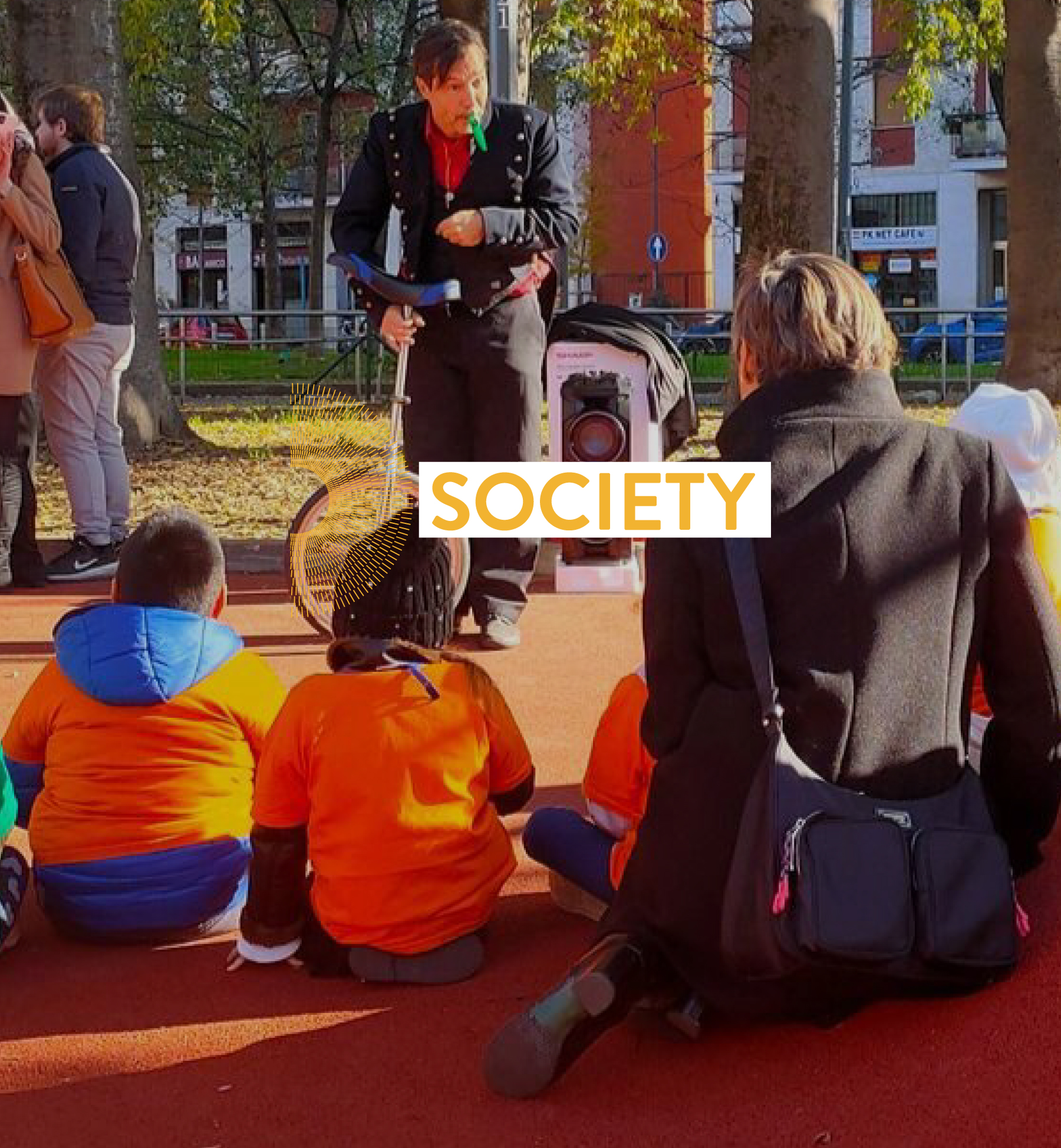