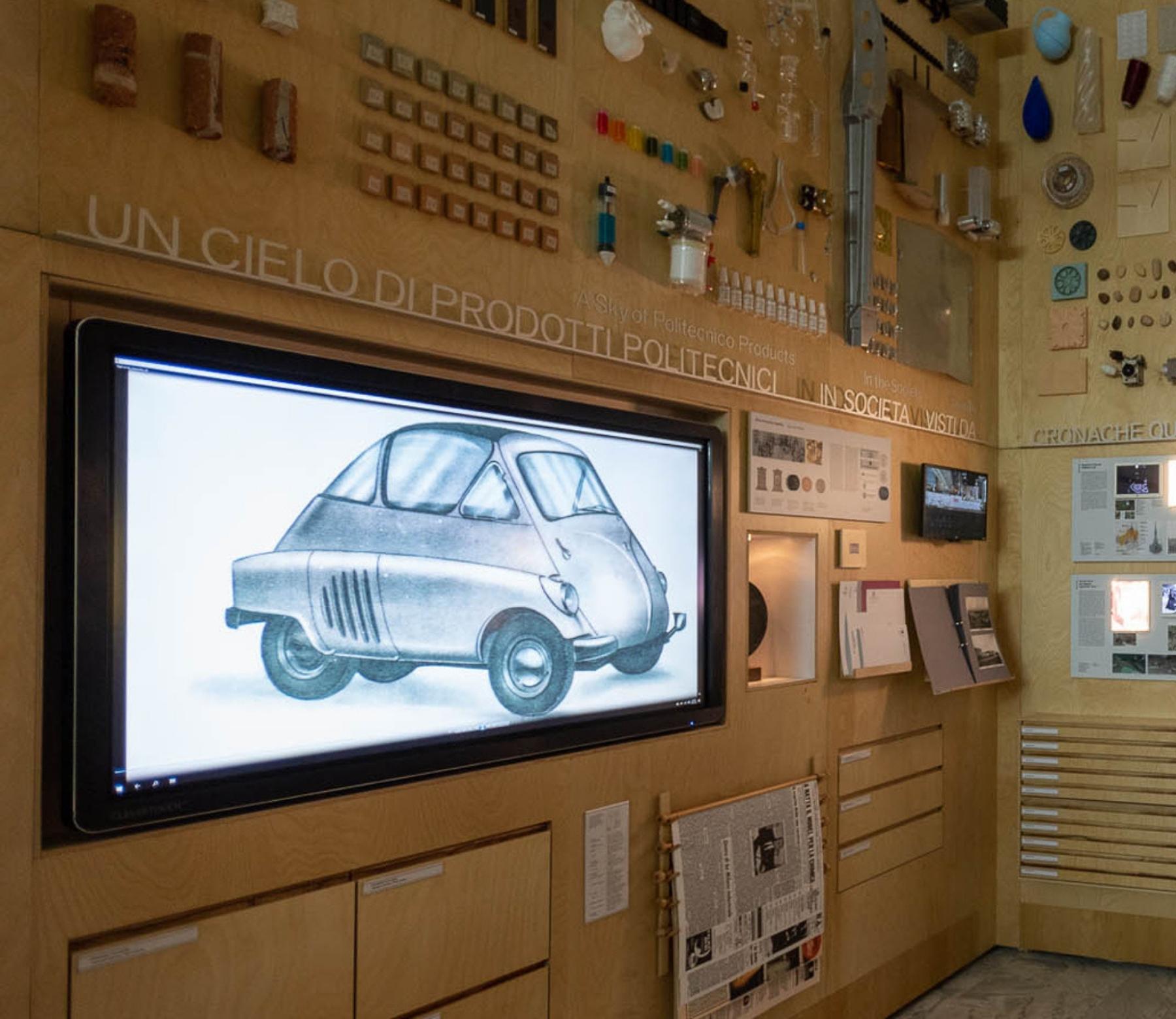 We are sure that you will have unexpectedly come across a work of art while running from one lecture to the next. The Poli’s collection comprises many works created by great artists and designers: works that represent the university's history, its values and its DNA. An open-air museum with a symbolic entrance in the heart of the Leonardo Campus, in Piazza Leonardo da Vinci 32 (we told you about it in MAP 9, Made in Polimi), that can be visited virtually at www.museovirtuale.polimi.it.

We spoke to Professor Federico Bucci, the Rector’s Delegate for Cultural Policies:

We spoke about Ettore e Andromaca in MAP 10We asked Bucci about the value of these donations: "A work that comes from a private collection is made available to everyone and enjoyed by students in particular, who pass by it every day.  The students are therefore immersed in a cultural climate of the highest calibre, absorbing it, being stimulated and motivated.”

he Virtual Museum, like the physical museum which spans across the Politecnico’s spaces, is a work in progress, never finished, always evolving. “Not only do new works arrive, but there are many artefacts of great value that are still stored and protected in cupboards, that need to be assessed and exhibited in the correct way, telling the story of the pioneers that came before us, offering the hahahahshhsdjfsjfjbdbfjdajbfjd narrative background to examples of the Politecnico’s DNA created by the great artists hat have donated them over the decades. As an art historian, I really believe in this project which is not merely about preservation: it is an invitation to interpret memories in perspective, as our forefathers did, like Francesco Brioschi and Giuseppe Colombo, who worked on history in order to design the future. Entrusting a valuable work to future generations is an invitation to create something new", concluded Bucci.

THREE LINKS TO BEGIN WITH: THE CRC 102A, THE MUSEUM OF CORROSION DEDICATED TO PEDEFERRI AND THE GIÒ POMODORO COLLECTION

You can browse hundreds of works and historical objects in the Virtual Museum. Today we are inviting you to visit three of these virtual rooms (because there is not enough space for all of them here; although you can find them online).

The iconic CRC 102A, the valve calculator produced by the Computer Research Corporation. It was the core around which the School of Computer Engineering at the Politecnico di Milano developed, both in the field of research and that of teaching. It was made available to the community and partner industries and remained in operation until 1963.

“I like to imagine a young (Luigi) Dadda, returning from the United States at barely 25 years old, as he disembarked from the ship with a large box containing Europe’s first calculator", remarked Bucci.

The Museum of Corrosion, a collection dedicated to Professor Pietro Pedeferri, a 1963 Alumnus of Chemical Engineering and full professor from 1983, first of “Electrochemistry” and later of “Corrosion and Protection of Materials” who subsequently became the Head of the Department of Chemistry of Materials. It consists of a selection of approximately 140 case studies that demonstrate the behaviour of metals subjected to different types of corrosion.

The Giò Pomodoro collectionomprises 19 sculptures and two paintings. The works, entrusted to the university by Archivio Gio’ Pomodoro, are displayed in a permanent exhibition across the buildings and departments of the Bovisa Campus. In 2018, for the artistic project titled “The external dimension of sculpture”, the Politecnico di Milano received the Mecenati del XXI Secolo (Art Patrons of the 21st Century) award, "at the headquarters of the European Parliament in Brussels “for having transformed the campus into an open-air museum with permanent and temporary exhibitions”. 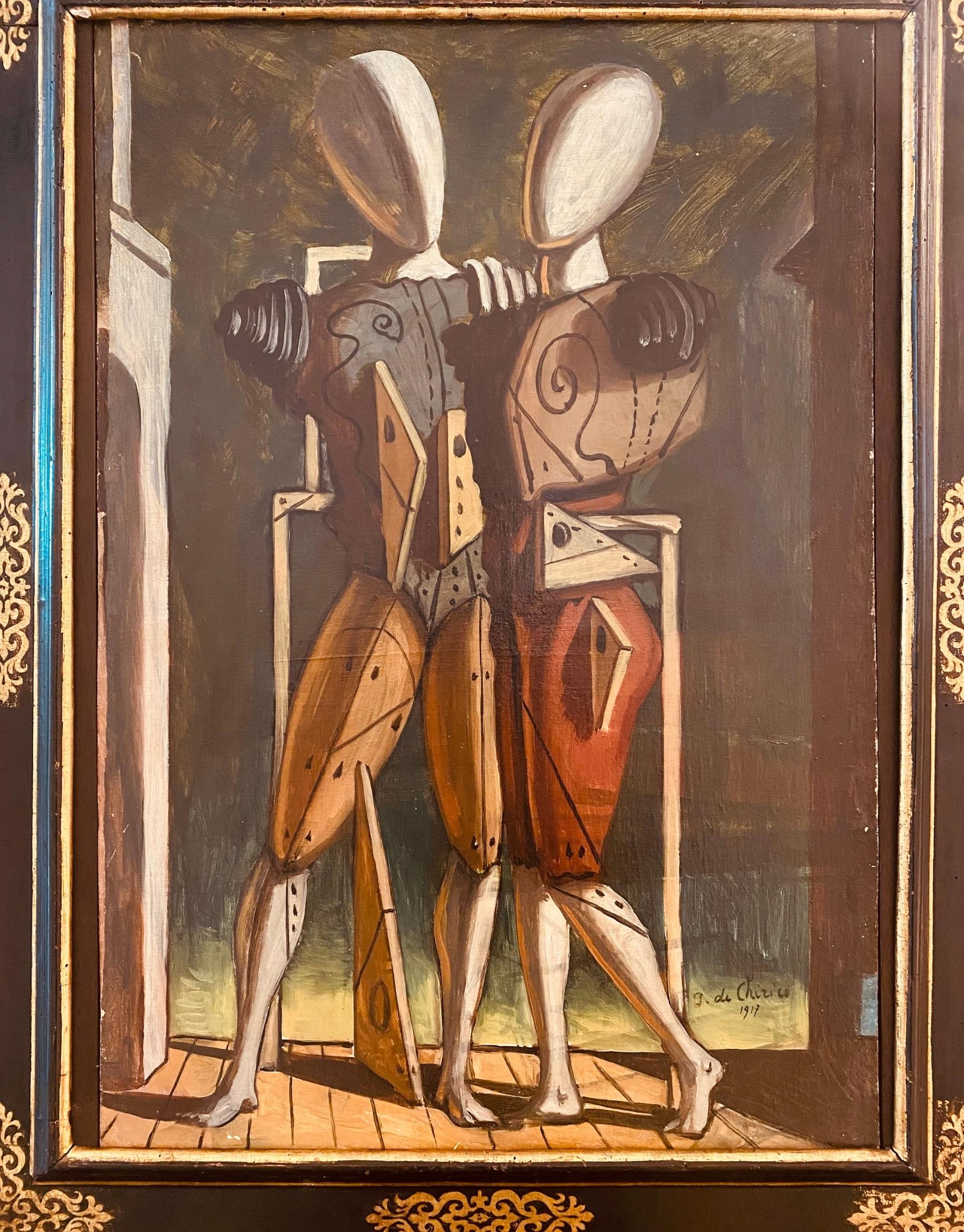 If you go through the automatic gates of the library in the Leonardo Campus and continue straight on, you might catch a glance of something in the corner of your eye just before the glass doors that separate the entrance hall from students studying intensely: there’s a doorway.

Casting your gaze the doorway, you can see a painting. It hangs on the other side of the wall, in a small, dedicated room. “Ettore e Andromaca” (“Hector and Andromache”), an oil painting on canvas measuring 82cm by 56cm, is stored there in a glass case. The canvas is signed in the bottom right-hand corner: Giorgio De Chirico, 1917. “Every so often students ask whether it’s real,”, we are told at the library reception. And the response is yes, it's an original De Chirico.

Federico Bucci, the Rector's Delegate for Cultural Policies and Vice Rector of the Mantua Campus of the Politecnico di Milano, explains its provenance:

“The work comes from a donor who asked to remain anonymous. He wanted to give it up on one condition: that the painting was to be enjoyed by the students specifically. So, we decided to position it in one of the passing places of the Campus, and in a passing place of thought. We’ve put it in particular place: there's the intriguing doorway, and once you enter the room there’s a bench on which to sit and fully appreciate the work. We wanted to create the same sense of tranquillity when you are looking at the painting, the same feeling as when you are sat in the library in front of a book, delving into the subject.”

The painting depicts the verses of theIliad in which Andromache begs Hector not to leave the walls of Troy in order to face Achilles in battle. In these verses Homer writes: Andromache...clasped his hand and spoke to him, saying: “Ah, my husband, this prowess of thine will be thy doom, neither hast thou any pity for thine infant child nor for hapless me...nevermore shall any comfort be mine.

A few steps away in the Sala Guernica there is a reproduction of Picasso’s Guernica, which was created in 1973 by “Movimento Studentesco” (“Student Movement”). Bucci recalls that period:

“They were years in which the students’ ideological commitment led them to replicate an anti-war piece, which is still relevant today. The reproduction of that Picasso work has a specific meaning: here you study, you work on a particular topic but then you lift your gaze and reflect on the future of society, on the goal of peace. Positioning this De Chirico here today has the same meaning.”

He then delved into a description of the scene: “it's a painting in an architectural setting, beginning with the central perspective of the floor, which has the same colouring as the two mannequins. The two figures are tailoring tools which cannot embrace one another, telling us that modern man needs heart, spirit and humanity. And it reminds us that while I am here and I am studying mathematical analysis or building science, while I am designing the future - because that’s what we do at the Poli, we lay the groundwork for the future - there, I am called back to humanity. It’s a way of reflecting that, of course you may become an architect, an engineer or designer, or maybe you aspire to become a Nobel Laureate in chemistry, but the important thing is to stay true to ourselvesTherefore, putting an artist here means sending a message first and foremost to say that yes, we have our profession, but we will never forget that we are people".

“A WORK OF ART IN A LIBRARY REMINDS US THAT WHILE WE ARE STUDYING TO DESIGN FUTURES, WE ARE CALLED TO HUMANITY”

Andrea, a student of Electronic Engineering, stops in front of the painting and remarks: “Being in a place of knowledge, surrounded by icons, motivates me to study. It feels like being in a museum which is in some way only open for you.”. Gianluca, a student of Mechanical Engineering, adds: “Having a work of art like this gives personality to the library. The figures look like they could be studies of aerodynamics applied to the human form.”. Beatrice, a student of Management, Economics and Industrial Engineering who chose History of Art as an optional course, said: “In an environment of technical minds, I see art as a form of freedom, an extra resource, a reminder that we can use our imagination. The fact that the painting almost needs to be discovered behind this doorway gives a sense of looking into things and gives the impression that the Poli is a place which is also connected to art”.

The Leonardo Campus library catalogue includes certain titles devoted specifically to De Chirico, such as the book by art historian Vincenzo Trione, “Giorgio De Chirico. The city of silence: architecture, memory, prophecy” (Skira). One student left a mark by underlining certain passages in pencil: “that which interests him is not solid reality, but the theatre of the space. He covers recovery and bleakness, playing with literal homages and disguises. He always bases his work on real figures which he then modifies, until they become almost unrecognisable, echoes of a dawning world.”

On the topic of students, Federico Bucci observes that “in the 1920s, a student at the Politecnico that knew about metaphysical painting probably stood in front of this painting himself. It is important that there is a recovery and an exchange between the young generations of then and now. In the library, we have also put up drawings from the archives which were created by students between the 19th and 20th centuries, precisely because we envision an art collection that is capable of interacting with our memories.”".

Meanwhile, a girl who has just passed through the library's entrance gates slows down. For a moment, before entering the study room, she looks at the doorway, intrigued.