Can you get attached to a university classroom? From our MAP archive we will tell you about the historic Aula Natta

You enter as if secretly the classroom C.I.1 in Building 6, or the l"Giulio Natta" classroom in the "Giulio Natta" Department of Chemistry, Materials and Chemical Engineering, an organic compound of wood, slate and Politecnico history.

From a small door you find yourself in front of a large audience: thirteen steep rows of large and solid wooden desks, a wall of blackboards almost to the ceiling, they rise and fall and multiply, but after years and years of lessons they always keep track and only of the last lesson held, in a cycle of rebirth that recalls the cycles of students, generations of fathers, children and grandchildren who studied here. The windows are almost completely shut out by thick curtains, as if the sunlight from Città Studi could steal something of the spirit of the time. The chair, in the same reddish wood as the desks, is the one from which Giulio Nattataught Industrial Chemistry, from 1938 to 1973, while in the laboratories around here he experimented and discovered the stereospecific synthesis of polypropylene.

A classroom so large in every part seems to have been built for giant students. When they visit, the Alumni shrink, however, hesitating cautiously on the threshold, while the wives, the husbands and children explore and climb up the stairs, up to the summit, the window from which you can see a tree and the surrounding world. Family members wander and former students remain still in the memory of what it was: someone checks in the corners as when returning from a long vacation, looking for a detail out of place and finding everything in the usual order, others are looking for companions to remember. One takes a quick tour, regaining possession of an abandoned space, goes out and immediately calls a friend with his smartphone, tells him in amazement how "nothing has changed in Natta, while the Politecnico is a whole different thing, new".

An endless list of programmes followed begins, "they now seem like just names - says an Alumnus - but at the time they were lessons, hours spent here": Chemistry, Construction Sciences, Information and Transmission Theory. Each remembers a legendary programme of a mind-blowing year, their own. If the desks were used as a carbon copy, tens of thousands of handwriting could be traced, millions of notes, billions of formulas. A father shows his son the blackboards. Some recognize themselves in the glasses they wear, showing them to each other:

The children lean on the desks to which their parents arrived breathless from home in the mornings of their youth, leaving scarves, hats, gloves and any other clothing to keep a valuable place in the front row. For once, the Alumni that are always early meet their classmates who are always late, those who arrived after the lesson had begun and remained outside to avoid the angry look of the teacher and the audience.

An electrical engineer of the class of '87 tells of the best programme in history: Rational Mechanics held by Amalia Ercoli-Finzi, the first female aeronautical engineer in Italy, the "lady of the comets". Exactly on the stroke of the hour, without a speculative quarter hour, Amalia Finzi entered, greeted and began to write notes on the blackboard from bottom left, explaining with a clear voice that rose towards the entire audience, as if speaking and explaining to each one of the two hundred students, guiding the youngsters into the secrets of mechanical systems. When the bell rang, the professor stopped with the chalk, the last formulas were on the last blackboard at the top right. Every day a wall of formulas, for a season, until one of the last hours of one of the last days, from the fourteenth row of benches, the spell is broken: a student gets up and throws a paper airplane, the first of the programme. The first Italian aeronautical engineer looks at the glide and the ruinous landing and with an indulgent look forgives the thrower, it is not known whether for the lighthearted gesture or for the constructive errors. The programme ended without other airplanes, forty years after Amalia Ercoli-Finzi celebrated her 80th birthday at the Politecnico, the thrower maybe goes around the Natta looking for his desk, his scarf, his notes.

MAP is one of the many initiatives created by Alumni Politecnico di Milano. If you like this initiative and the other ones dedicated to the Alumni community consider donating.

.
OTHER ARTICLES FROM THE SECTIONAlumni Community

Something you didn’t know: 3 things invented by polytechnic alumni that you use every day
The minds of alumni are behind the technology that is now essential for working, travelling and living in the post-pandemic world.
20/12/2022 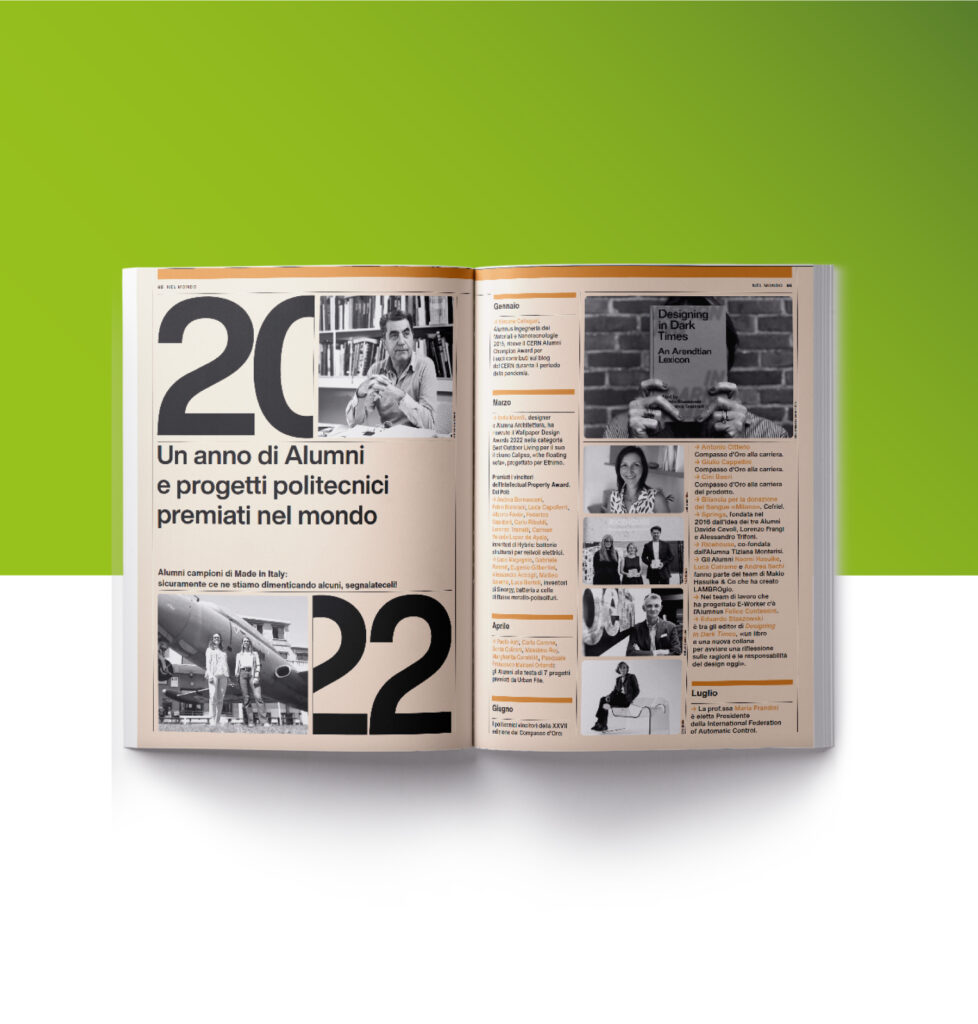 The 11th issue of MAP, the Alumni magazine, is here!
The magazine is enhanced by interactive content to better tell the story of the Politecnico Alumni and Alumnae
06/12/2022

Who are the 3 Politecnico Alumnae in the Fortune 40 Under 40 ranking?
Andaloro, Rossi and Trussoni are the Alumae under 40 who, according to the magazine, have distinguished themselves in guiding their companies–and Italy–towards innovation
08/09/2022

Issue 10 of MAP, the Alumni magazine, is out now
This issue is an important milestone for the magazine, which offers information on and insights into everything conceived, developed and launched at our university
20/07/2022

Cini Boeri: a life spent "designing joy"
Her passion for architecture, her relationship with Gio’ Ponti and her struggle during the resistance. We remember her with an interview from 2015
20/06/2022
SPOTLIGHT