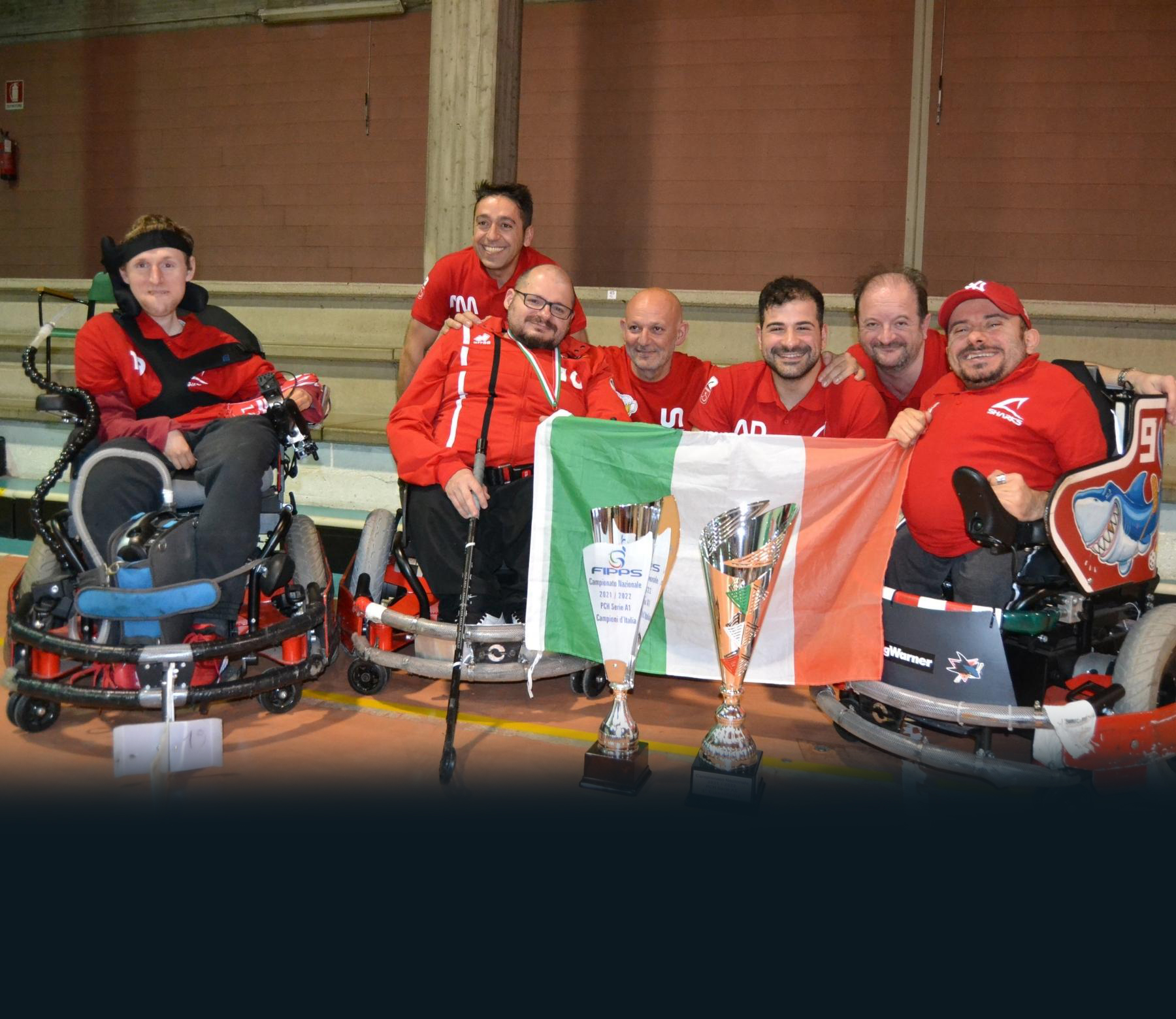 “A great red and white heart has dreamed about this moment for years. Always on the verge of victory but never quite bringing home the title. Today that dream has finally come true, and it's for real: Sharks Monza are Champions of Italy! GO SHARKS!”

This was the post on the official (you might have guessed it) Sharks Monzapage: the Powerchair Hockey team that has won the title of Italian Championship after 22 years of narrowly missing out, dominating IOP Madracs Udine 9-2 in the final held in Lignano Sabbiadoro (Udine).

Pietro Ravasi, the Sharks’ mechanic, a mechanical engineering alumnus and meritorious citizen of Monza for his sporting achievements, shares his story and passion. Powerchair Hockey is played using electric wheelchairs. In Italy there are around 30 competitive teams vying for the title in a championship organised by F.I.P.P.S. (Federazione Italiana Paralimpica Powerchair Sport).

In this sport, the mechanic makes all the difference: the wheelchairs used by the players are, essentially, almost all the same: “there are 3 or 4 constructors across the world, but in the end people tend to buy the most competitive model. The thing that changes is the set-up of the wheelchairThe wheelchair’s engineering can be crucial for achieving results, but above all it is the means of protecting the safety of the athletes as much as possible” Athletes like Mattia Muratore, a paralympic ambassador and captain of the Sharks who suffers from osteogenesis imperfecta, also known as brittle bone disease:We and the wheelchair have to be as one”, he explained to the Poli Alumni“I have always wanted to play sport, but it wasn’t easy to find one that suited my disease: the slightest impact could have serious consequences. Nevertheless, here I am. At middle school my PE teacher, unlike other teachers who kept me in the sports hall to watch the other pupils, started to coach me to use a hockey stick. I have never looked back since.”

Ravasi works as a mechanic on unique parts, modifying the wheelchairs to suit the athlete’s needs and specific disability: “I completely strip them down and rebuild them from scratch in order to perfect the set-up and personalise them for the players.” It’s a partnership that began in 2006: “Luigi Parravicini, the Sharks captain at the time, needed a wheelchair to play but couldn’t find one. Back then, they were accustomed to having the wheelchairs modified by friends, by amateurs as a hobby. However, I’m a Poli engineer. I came with experience as a designer and an inspector for a business that manufactured go-karts and I used what I had learned in that field and what I had learned at the Poli to begin working on a custom wheelchair for Luigi. Then in 2014 I was appointed to the national team as an official mechanic and I took an extra wheelchair that I had designed. That same year we went to the World Championship together for the first time. There's no way we can forget it: we came second last.”.

But Ravasi and the team did not admit defeat. “When I went home, to Monza, I built two other wheelchair prototypes for the Sharks and I developed, for the first time in the Italian Championship, identical sticks perfected for the team. Powerchair Sport wheelchairs must be agile and made of materials that are light and robust in order to protect and be controlled bypeople with limited muscular strength: the stick is a plastic paddle similar to that which is used in floorball and is made with plastic materials that are very light, but even so there are some players that cannot use it and instead utilise a sort of paddle which is attached to the front of the athlete’s wheelchair, allowing even those that cannot hold the stick to control the ball and play a part in the game. “It’s a lot of hard work and the electronics are crucial. Each player has his own specifications and the electronics are adapted to his or her specific rotation and braking. The athletes must have personalised wheelchairs based on their role and physical needs. Then there’s the maintenance work, which is very important. These chairs cost about €17,000 each.”

Since that first setback in 2014, the mechanic Ravasi and “his” powerchairs have come a long way. As we mentioned earlier, this year the Sharks brought home the title. But that is just the latest in a series of accomplishments. “We reached our first European final with the national team in 2016 and finished as runners-up. We went into the tournament as underdogs, we were in the hardest group and we started against second best team in the world; and we beat them in the first game. We were creating a good team.” During the last World Championship in 2018, the Italian Powerchair Hockey team took the title by beating Denmark in the final. The European Championship would have been held in 2020 but instead they were cancelled because of the pandemic, just like the national competitions. So there are big hopes for 2022. The 5th Powerchair Hockey World Championship will be held in Switzerland from 7 to 15 August 2022.  As reigning world champions, we are aiming to win our second world cup, competing against the other 9 teams that have qualified: Germany, Denmark, Australia, Canada, Holland, Switzerland, Belgium, Finland and Spain.

Following these accomplishments, Ravasi is ready for a new adventure: “I offer my best wishes to our national hockey team because I now have a new role as a mechanic in the newly formed Powerchair Football national team. Wheelchair football has reached Italy and is very popular around the world, unlike hockey. It already has sufficient numbers for the Paralympics and the federations are working to unify the regulations.” This year, the first Italian Championship was held and won by Thunder Roma ahead of Aquile di Palermo; the Black Lions di Venezia were third ahead of Oltre Sport di Trani. Certain teams have been built from scratch that only play football, like Oltre Sport, while there are others that already had a hockey team and created a football team, such as the remaining three finalists. “8 players have been called up to the new national team to represent Italy at the EPFA (European Powerchair Football Association) CUP from 16 to 22 August in Geneva, which will see us compete against Austria, Belgium, Germany, Scotland, Spain and Switzerland.We will also be the team with the most female athletes (3 women out of 8). The wheelchairs are different to those used in hockey, the best being the American model. There are also Swiss models which are the best for hockey and have a special bumper for football (these are the most widely used because, as we mentioned before, many players compete in both sports), whilst there is an Italian constructor that has started to produce its first prototypes. We will have to figure it out because, in any case, in Monza we won’t be playing football so I will definitely have to come up with a different plan. It will definitely be a great experience for the athletes, most of whom will be turning out in Azzurro for the first time, whereas for me it will be useful to gain experience while keeping one eye on a good performance.”